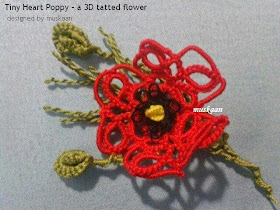 I am seriously into writing & uploading the pattern in pdf format, exploring combinations & avenues that work for me without too much hassle or learning, .... but am finding that it is taking me more time than initially anticipated. Hence, I’ve decided to share the pattern in stages, so that if anybody is interested, they can start tatting along. It will also give me time to tweak the final pattern with any feedback & suggestions provided, as well as work without any pressure.
Another reason is that it will allow me to explain certain elements in more detail.
While notations & diagrams are provided, I am also writing it in longer script …

The flower can be made Very Quickly, even though the written format seems long :-)

Peace & Tolerance Tiny Heart by Mónica Manceñido is the base for the flower petal. Hence I have named it Tiny Heart Poppy, in appreciation of her versatile original pattern.
For more examples of the versatility, check out my previous 'Designing 101 post' ;-)

In order to write out the pattern, I have followed Jane Eborall's notation to a large extent.
I apologize for the unprofessional diagram ... hoping to do a much better job learning & drawing on a new program ...

2 shuttles, CTM, with red colour thread
Refer to Diagram below ... 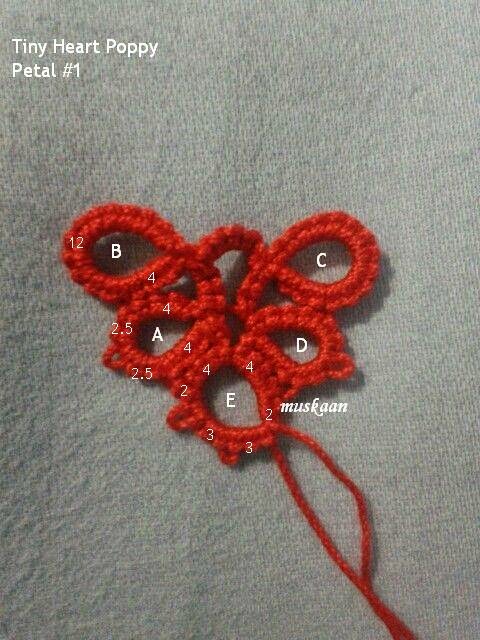 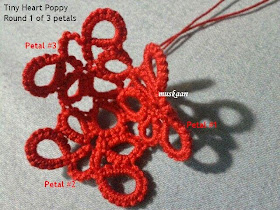 TIP : One can forego All Reverse Work & tat purely from the front side by using Reverse Stitch ( also known as Lark’s Head Knot, Direct Tatting, Wrapped/Unflipped stitch or Reverse Double Knot as in Directional Tatting). This is applicable wherever FS/BS tatting is indicated in red. So, instead of FS/BS, do the rs & don’t see the reverse of the work ! 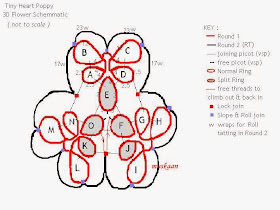 Bring the threads up to the picot join between rings J & K & make a Lock Join (as indicated in diagram). You can either bring up the bare threads (since it is a very short distance), or a chain of 2-3 ds can be made to ‘climb out’, and then Lj to outer picot join.
From this point on, Roll tatting chains are made & joined at regular intervals, to create an outline encompassing each tiny heart petal. 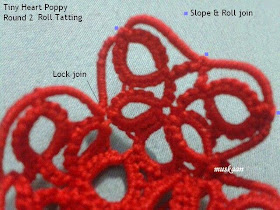 
TIP : Patty Dowden shared this wonderful tip in same thread. “If I am roll tatting a ring or a chain and need to join to a picot, I just start an up join and then I don't finish the second half. By simply working the first half of a join, the appearance of the roll tatting is preserved and the join is just fine.”
Moreover, there is no need to do a ds before & after a join. “I like to keep my roll tatting as roll tatting from start to finish.”
The visual outcome is Amazing !

TIP : Another way of doing the Slope & Roll Join :
Slope & Roll Join can be made in following manner, which I find easier & quicker as the motion of shuttle remains fluid, all in same direction. End result is the same. We have discussed this in a Craftree thread here
It can be made when one is working with 2 shuttles or a shuttle & ball :
To make this join :
1. Bring Sh1 thread up through picot/space to make a loop (as in normal picot joins) ;
2. Pass Sh2 through this loop;
3. TUG at Sh1 thread to PULL DOWN Sh2 thread ;
4. And simultaneously snug the wrap/join. It should become smooth & allow the previous stitches to move freely on the core thread ie. Sh1 thread. (it does not lock the stitches)
Patty D has pointed out that this is similar to Teiko Fujito's "outer thread joining method" (post #3 in above thread)